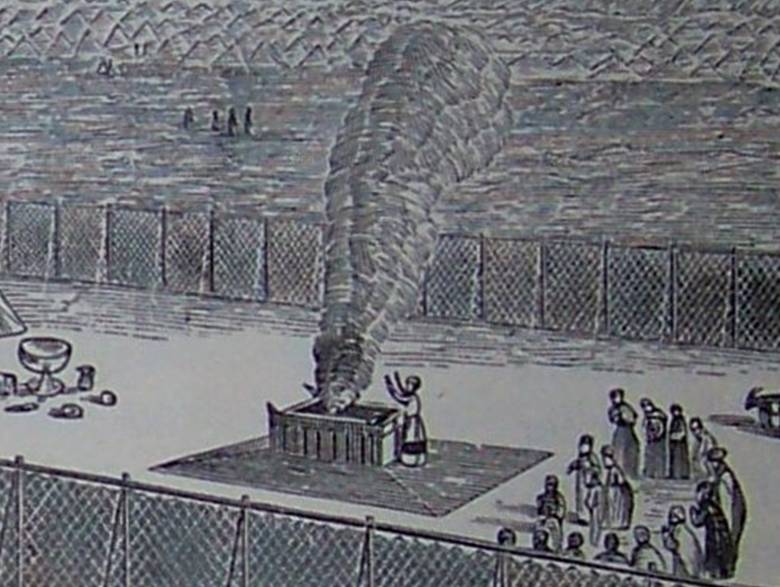 Shadows of Worship 4: The Altar

The Altar in the Wilderness
As one entered the tabernacle complex, they would pass through a colorful tapestry that functioned as a gate to the outer court. As they emerged into the rectangular courtyard, the very first thing set before them would be a large square altar. The altar is about seven and a half feet long, about seven and a half feet wide, and about four and a half feet tall. It is made of wood and covered in bronze that shine in the desert sun. Built into each of the four corners of the altar are protruding horns. The altar also includes a grate that allows the offering of the Israelites to be incinerated before the Lord. The fire on this altar burns all the time. Its heat, glow, and aroma are present in the courtyard of the Tabernacle always.
A Picture for our Worship
The Bronze Altar primarily illustrates the sacrificial death of Jesus. As Jesus approached the Jordan River, John the Baptist proclaimed, “Look! The Lamb of God who takes away the sin of the world!” (John 1:29). Jesus is referred to as a sacrificial lamb by Paul in 1 Corinthians 5:7 and by Peter in 1 Peter 1:19. Revelation is also full references to Jesus as the Lamb of God. Jesus was our sacrificial lamb who not only died for the forgiveness of a nation for a year, but for the entire world for all time. The first element one encounters in their faith journey is the sacrifice of the Son of God. It is by this sacrifice that those who believe gain access to God, find forgiveness, and are granted eternal life.
As followers of Jesus, we are called not only to believe in who Jesus is and what he did, but we are also called to live lives that reflect that revelation. We too are called to give our lives. Unlike Jesus, our sacrifice is normally not physical, but a continual dying to oneself (Matthew 16:24). We are called to be “living sacrifices” (Romans 12:1). As unpleasant or unpopular as it may be, death is an essential part of Christian maturity. This is not a death for death sake, but a death that leads to new life. The altar is smelly, messy, and, many times, an unpleasant place to be, but it is the essential door that must be passed through in order to experience the life of a disciple of Jesus. We must truly offer up everything to be his disciple.
I tell you the truth, unless a kernel of wheat is planted in the soil and dies, it remains alone. But its death will produce many new kernels — a plentiful harvest of new lives. – John 12:24
A Picture of Heaven
A sacrificial altar appears a number of times in the prophetic writings of the Bible. Revelation 6:9 states, “…I saw under the altar the souls of all who had been martyred for the word of God and for being faithful in their testimony.” This altar is mentioned a number of other times in Revelation (8:3-5, 14:18, 16:7). In Isaiah’s heavenly call experience, he states that an angel took a coal from the altar and touched it to his lips (Isaiah 6:6). It is possible that this might have been the altar of incense (a part of the tabernacle we will speak about soon), but more than likely it would have been referring to a larger, sacrificial altar that produced a great deal of cinders and coal. The writer of the Book of Hebrews also mentions an altar apart from the one found in the earthy tabernacle. “We have an altar from which the priests in the Tabernacle have no right to eat” (Hebrews 13:10). There is certainly another altar beyond the one that served in the midst of Israel’s earthly worship locations.
Our Response
The sacrificial death of Jesus is central to our faith. Like many things, it can become so familiar, that we somehow lose sight of it. No matter how we have progressed in our journey with God, the revelation of the Cross of Jesus should never become too distant, too fuzzy, or too un-real. Has your vision for the cross become less than clear? I invite you to remember. Reading though John 19 and 20 might help.
Not only is it essential we keep the fire of the revelation of the cross clear in our hearts and minds, but Jesus also invites us to personally pick up our own crosses daily. What area of our lives and ministries have we kept form the altar? What areas of our life are not given over to God? Ask God to reveal to you any area of your life that you have kept form the fire of his heavenly altar. If there is something, offer it up to God.